Kruella D’Enfer has lots of stories to tell about Village, all of which are of love and complete affection for a place that saw her grew up and went along, as possible as it could, her indomitable progress as a visual artist and illustrator. 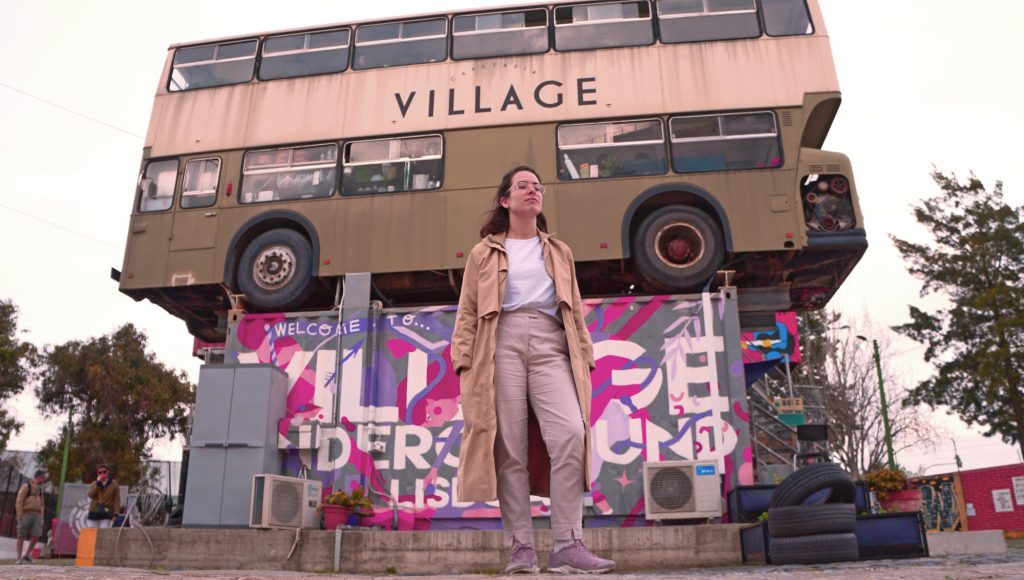 Even at a distance, she makes sure she visits this second home with the frequency desirable to keep her creative sanity well endowed. To Village she gave a message that has lasted through the years, under storms and climate turmoil, but always with that je ne sais quoi that’s so her, that doesn’t fade away or goes away. Colorful twists and turns seem to be a given in this village of containers, a living blend that enriches those who visit and stay — with their mouths wide open, stunned, I’m sure. And one of the first people to spread this visual abundance out was Kruella D’Enfer, Ângela Ferreira’s bold yet magical alter ego.

In a time when Village was given its first steps, Kruella sprung for it and asked to be a part of it, since she was also trying to get ahead with her short career as a visual artist and illustrator. “When Mariana was starting to build Village was when I was looking for some space to work in. Since we already knew each other, I texted her and asked if she’d be interested in filling the containers, in a way that the space was not totally empty, we could even take some photos and promote it. It made all the sense to Village to have movement and see if it was going to work. It was a trial of sorts. I ended up staying almost a year before I moved to Thailand for a handful of months”.

From Kruella’s vast repertoire we can expect enigmatic twists that stand out thanks to the colors, most of the time graced by the presence of singular creatures that have nothing better to do than to welcome us to their universe, which is also what she did at Village: “this started pretty slowly. First it was the giant wall painted by AKACorleone, but there was another container facing another entrance that could use some painting, too, with something that would emphasize the name”, she tells me. And there it goes, WELCOME TO VILLAGE UNDERGROUND LISBOA, a message that perfectly fits into the eclectic soul of the space. 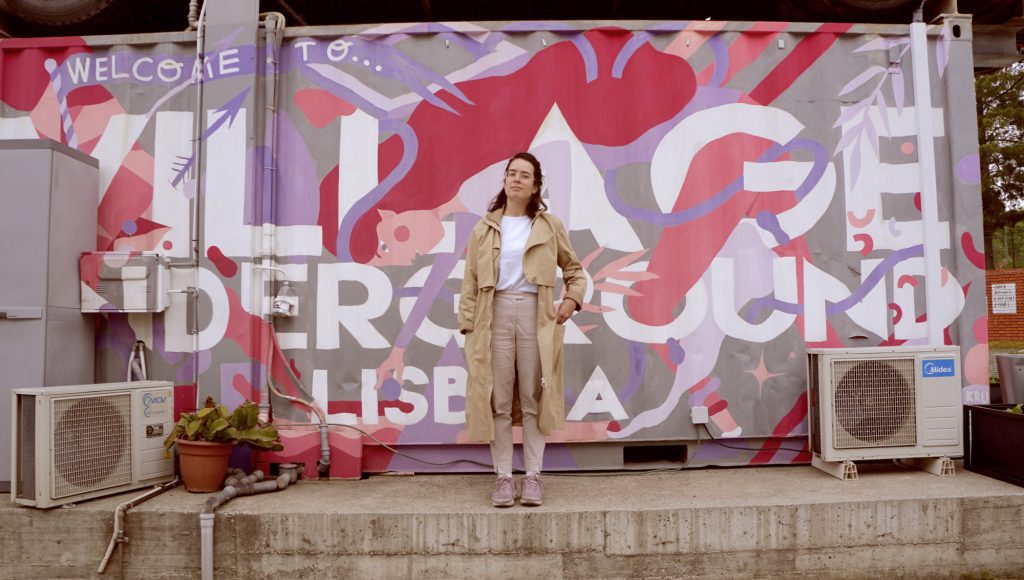 After that, the relationship with Village has been “great” and keeps materializing step by step when the opportunity arises, like the collective exhibition with Halfstudio, in 2016, or the workshop about illustration and street art for students from the Communication Design and Performative Arts degree at ESTAL, in 2017. It’s still utterly invigorating to realize a young talent who virtually started in one of these containers — that have seen a lot of creative customs — can look at younger generations and do something for them without questioning it. Mariana Simão, for example, got her to thank for the appropriate paints for her first wall on one of the containers, something that she wasn’t grasping and that Kruella caught on time. Details from someone who’s been working for quite some time in this field and is not afraid to pass on a word of wisdom.

“There’s always many stories to tell about Village”, she says among smiles. “This was always a place where I’ve been given total freedom and where I can always count on finding people from different fields. I also enjoy coming here when I’m doing interviews because I feel this is essentially a pretty illustrative place of what’s going on in Lisbon. Village is a lot of things, but they all have something to do with what interests me”.