From the unyielding persistence to the rightful world domination

Five are the fingers in one steady hand. Two are the pillars that keep all of this together. These are the most important numbers for Village this year, and that’s why we’re here. If the strongest go down in History, then this village is on track to becoming the most amazing celebration so far. This saturday (and sunday) party was the confirmation of all this: 2019 is the year where the walls came down and the future is bright on the other side. 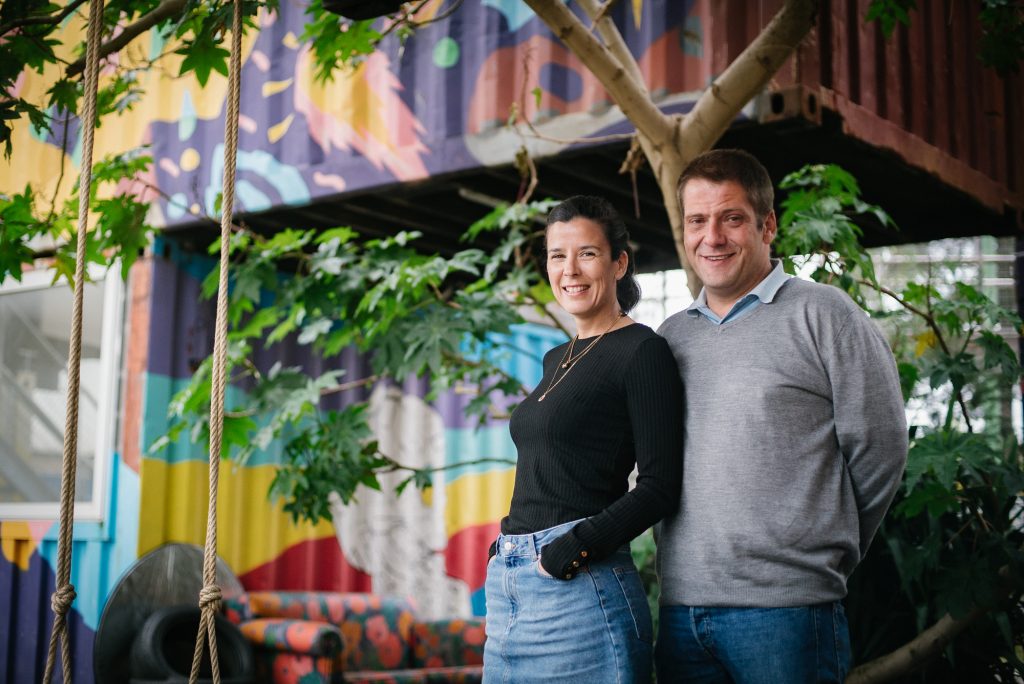 Many years ago, certainly more than what brings me here today, Mariana had an opportunity that few get in life, if they don’t know how to interpret the signs, to give rise to an idea and push it further, against all odds, without ever giving up the fight. In 2007, when she was still working in London — in one of those jobs that are so distant in time they’re almost forgotten — she remembers passing by tube carriages stacked up on a warehouse-like building. That vision mesmerized her until it made sense to go in and realize that place was perfect to work on her underground DJs and artists booking project, Madame Management, which she let simmer in this magical place for two years where creatives of many fields and walks of life would gather in a thriving osmosis that she had never seen before. Its name was Village Underground and Mariana was determined to open a similar space in her native Lisbon. Tom Foxcroft, her business partner and founder of the older brother in London, helped her and motivated her in everything he could and soon also became her friend and confidant, probably one of the best side effects of this entire quest.

Fast forward to 2014 and… No, wait a second. Village opened that year, that’s right, but up until then it was all but a bed of roses. The financial crisis, problems, insecurities, questions, doubts — from other people, not Mariana — took their time and overstayed their welcome more than they should, shaping into “nos” against “nos”, until a door eventually opened, and then the real work was about to start. They settled in the Museu da Carris, the containers arrived, the double-decked buses were assembled, the space was set up to welcome the thousands of ideas for events that were bound to happen soon. Residents began arrived little by little, slowly, when the concept of coworking wasn’t as spread as it is today. The containers got a new face from talented street artists and things started looking up with, pardon the commonplace, lots of blood, sweat and tears. 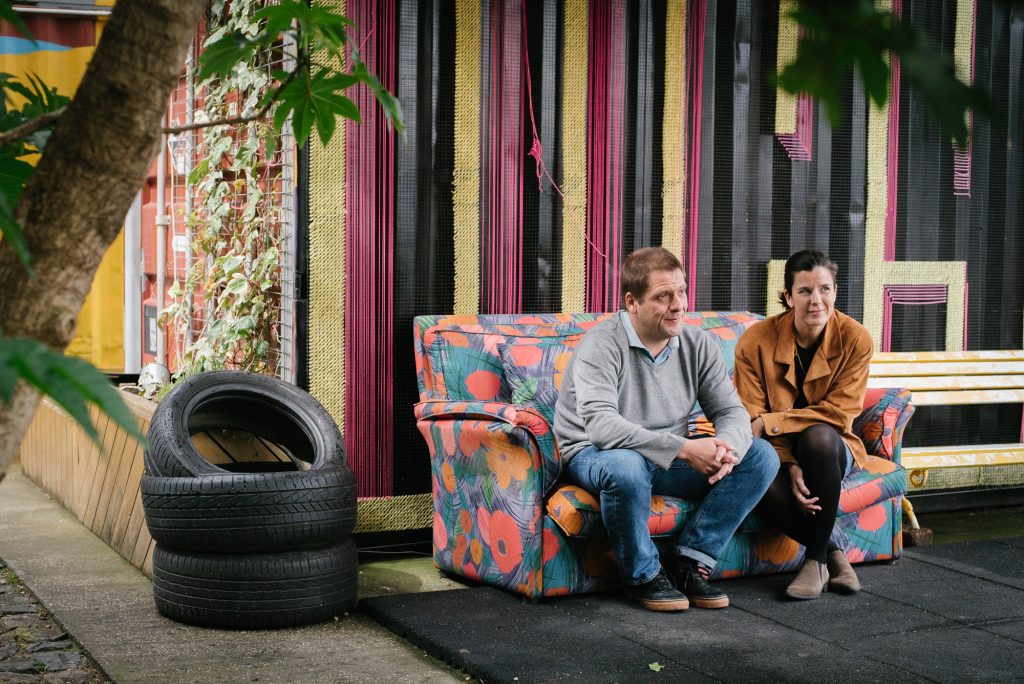 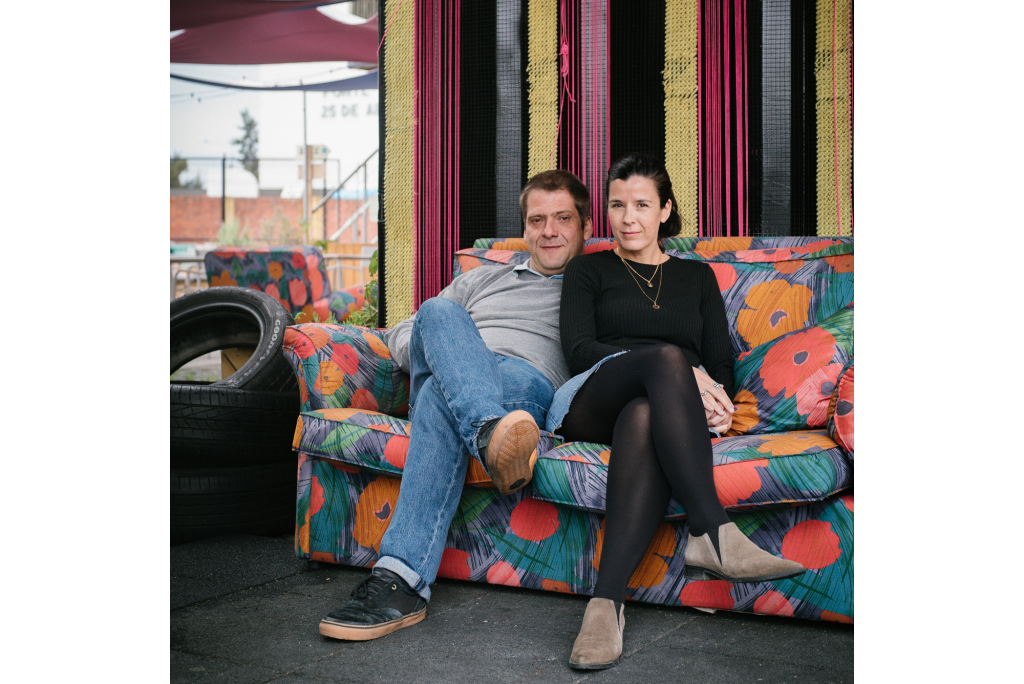 Now that five years have passed, it’s time to celebrate with those who built this enchanted world in the heart of Alcântara, side by side with the Tagus river and the 25 de Abril Bridge, Lisbon’s landmarks that keep pace with the evolution of a round-the-clock effervescent city. “This is a work in progress”, says Mariana, completely aware that Village will never be finished and that there will always be things to do, new people to welcome, events to prepare, news to release. Next to Mariana is her free-for-all in life, Gustavo. Together they’re the power couple of which there’s not much to add — actually, there’s a lot, since their explosion of energy is quite hard to overlook, the way they smile, the love that strings them together in their family and work routines, the awesome vibe of two people who’ve been doing this for so long it almost looks easy, but it’s not. “I’ve got a problem with all my dreams”, Gustavo confesses. “I can dream way too high and think of my next step. Now we’re at a place where Village has become this kind of backyard, an enclosed area with an outdoor space and another for events, plus the new entrance that will change everything”. This is definitely the game changer for Village’s five years of existence. ‘A wall is torn down / a new world rises’ are the verses that define this moment they’re experiencing with the opening of the gate to Avenida da Índia, a new milestone that will give them the independence they’ve been longing for since the first day and that will bring them new challenges and new crowds. “Since the first day we opened, people coming here look at that gate and ask us why it isn’t opened. Then we explain that it belongs to Carris and has been closed for 150 years and the only way to get in is through Rua 1.º de Maio”. No more. “When people internalize this new feature, it will definitely bring many rewards our way. And it will become something normal”. And that’s what will undeniably happen. ‘We peek through the other side / the mind unsettles / The first step to break down the barrier / The fun just got better / Daringly’.

In their minds, however, there’s countless ideas hovering that will be implemented sooner that one would expect. A project like Village doesn’t allow for twiddling one’s thumbs and there’s always something happening, always rumbling in a restless state of transformation. “The next phase will be to build the creative workshops at Village. We, the team, need infrastructures to build a number of things we’ve been wanting to put into place. We’ve got a tiny workshop out here, but we need machinery. In addition to that, we’ve got a couple of proposals from crews that want to join us and make things with us: screenprinting, for one, and plastic recycling. First of all, we want to send a message that focuses on ecology and sustainability. Then, we also want to make our own merch and memorabilia”, Gustavo reveals. Besides the creative workshops, which will include things like carpentry, they will also build a rehearsal room by adding two more containers next to MetalBox, Gustavo’s brainchild. As if this weren’t enough, they are also planning on opening a Music School.

“Things are easier because there’s two of us”, Mariana says. “We share the weight of responsibility”. And it’s because of these two that these five years come as vigorous, full of energy, good music and good vibes as one would wish for, hoping for another ten, fifteen, even twenty springs well lived in Lisbon as a platform for culture and creativity that doesn’t leave anything to chance and is always a step ahead of all of us.