If they say two is better than one, then Halfstudio know it all too well

Duos usually carry a sort of magnetism that is hard to knock down, they complement each other, they finish each other’s sentences, they’re free in their collective individuality. Halfstudio do just that as meaningfully as they explore color, lines, textures, curves and overlays on their wall paintings and illustrations inspired by old hand painted signs, and Village is still quite lucky enough to show the world that LISBON IS THE NEW LISBON — nothing more, nothing less. 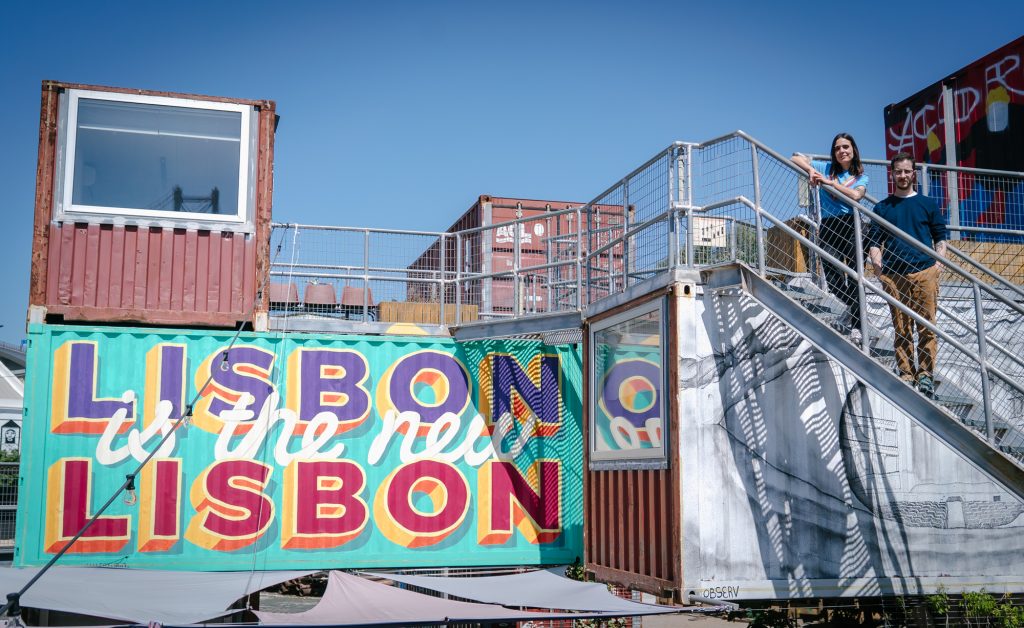 In love and labor, everything goes, particularly when the spoils of peace translate into colorful walls, vivid mirrors of a city that never stops, that renovates itself, and dances around us without losing its most intricate language. For Halfstudio, this oh-so-noble life motto is mostly shown in their lettering and sign painting studio and the most charismatic, on-point message that Village could ever aim for as a welcome mat, LISBON IS THE NEW LISBON, a direct consequence of their hard work and laidback success.

When they met back in 2010, the future was pretty straightforward and got them together immediately. From living together to sharing graphic design projects they usually worked on during their spare time was a clear-cut trip, and soon the name came up. A couple of years later and they bumped into the type of art they’ve been sharing since almost the beginning, in some way: sign painting. “We were fascinated by it and realized we wanted to make something like that, just for kicks and without giving it much thought. We noticed that it had already been something that existed in Portugal, not exactly as an art, but as a service. It’s definitely a stronger culture out there”, Mariana Branco and Emanuel Barreira tell us, almost in unison, this power couple of the visual arts — they won’t acknowledge this, I’m sure —, true aficionados of this tradition that started getting new, more modern approaches through their hands.

After that, the inevitable walls. The first one was in Barcelona, at Galeria Cosmo, in 2015. In the same year, they were invited by experimentadesign to be part of the biennale’s Tangents exhibitions. Mariana’s invitation came later, tiptoeing its way through thanks to Kruella D’Enfer, to grace the façade of one of Village’s containers with that message, the ultimate love letter to an ever-changing Lisbon. “LISBON IS THE NEW LISBON was Village’s maxim. Back then, a number of comparisons to other capital cities were beginning to emerge, so Mariana thought of this so that it would be as unambiguous as it could be that Lisbon could stand on its own”, Emanuel recalls. The process per se was easy, “the execution not so much”, they admit. “They gave us creative freedom and the sketch was almost immediately approved, but the rain that came down on us during those two days before Village’s birthday was a challenge”.

Painting this container coincided with the collective exhibition with Kruella. The scene was set up inside container 13 — which apparently was the same container she’d been during Village’s and her career’s first days. Inside, old painting and unappreciated objects, treasures more or less hidden from the flea market and bric-a-brac places, those kinds of things that can only be seen by those who can really see them, splattered with lyrics and colors from a common musical backdrop. A real-life grandma’s house was born — and she listened to Kendrick Lamar and Black Sabbath in the same afternoon. 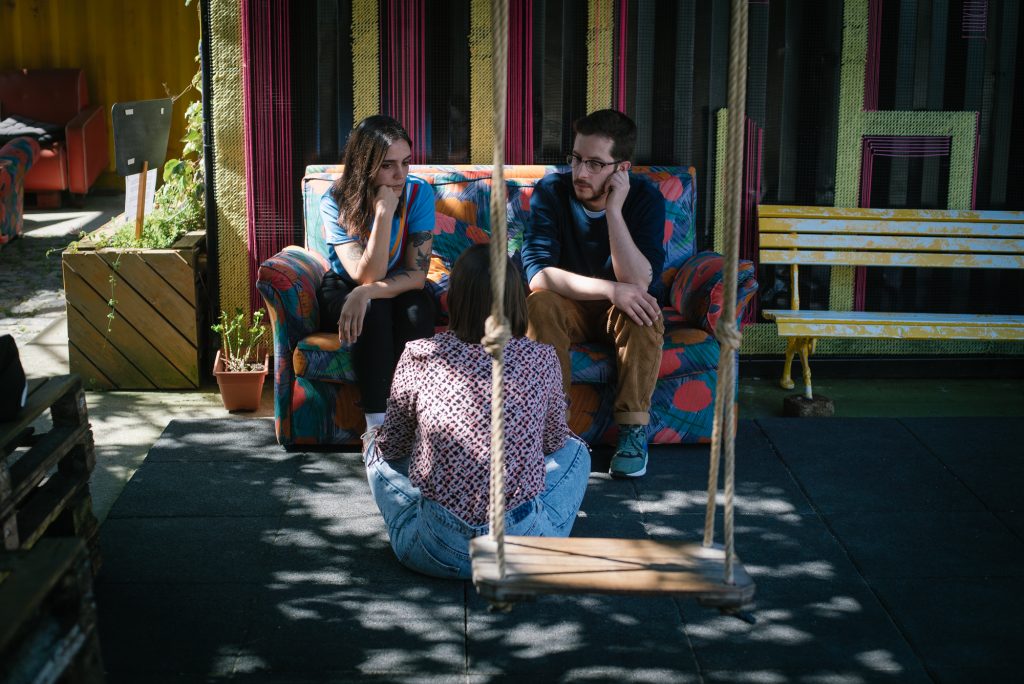 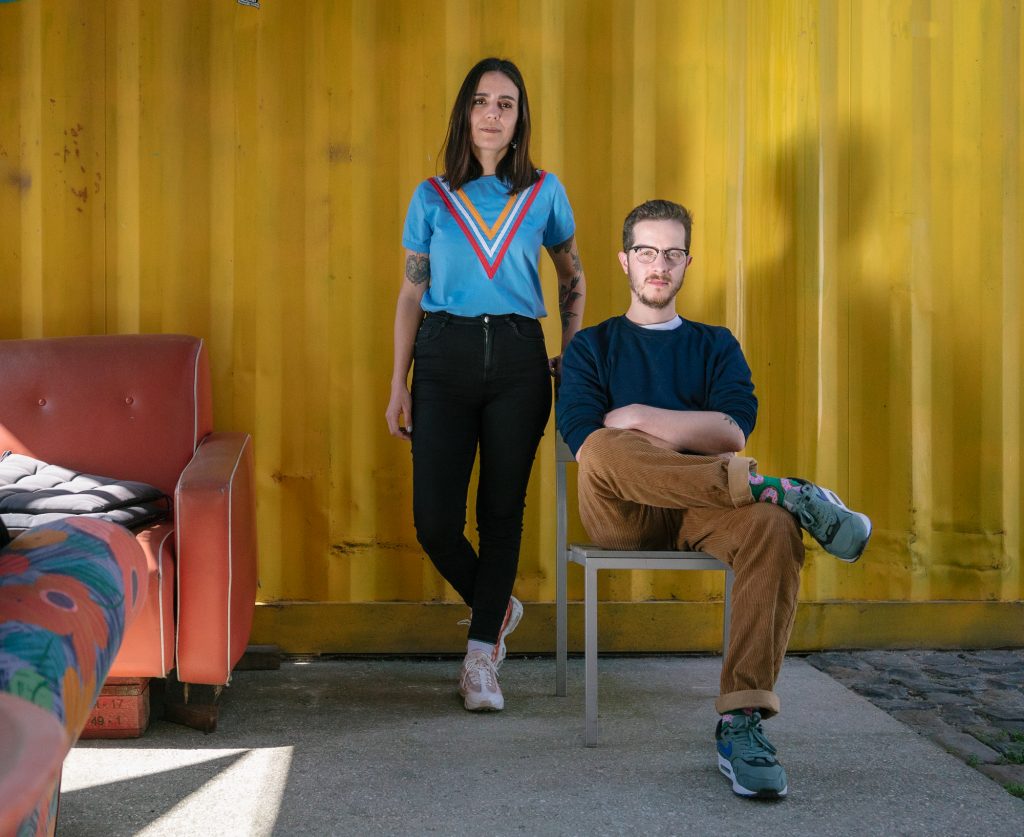 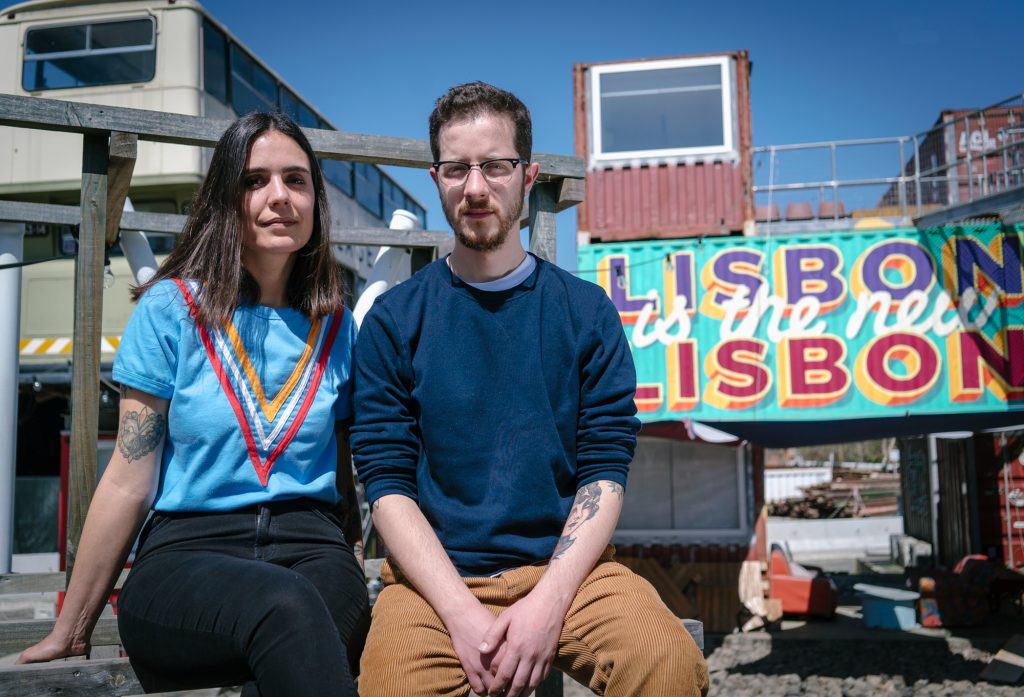 This experience brought them more than they expect, “that extra confidence boost we need to be able to go forth on our own, as everything with the container was done that way, from the projection to the preparation of the surface to paint, and we’d never done anything like this”, they say. At this stage, Halfstudio were also looking for a language that didn’t connect them only to the aesthetic of old signs. “Village’s role in this was really important to figure out where to go so we could get the identity we were running after, as we were given freedom to do whatever we wanted. To absorb everything around us also ended up influencing our work”.

The next year, as they were at Festival Iminente in London, a real estate developer from Boston contacted them to recreate the container’s painting with BOSTON IS THE NEW BOSTON. “He had been in Lisbon and seen the wall at Village and thought it made sense, because they were going through the same thing there at the time. Now we just have to turn this into a franchise and conquer the world”, they joke. Is the secret for globalization as we know it the ineffaceable crossing of certain realities onto others, as if it were a poetic copy-paste, without extinguishing what’s truly authentic? I certainly hope so.